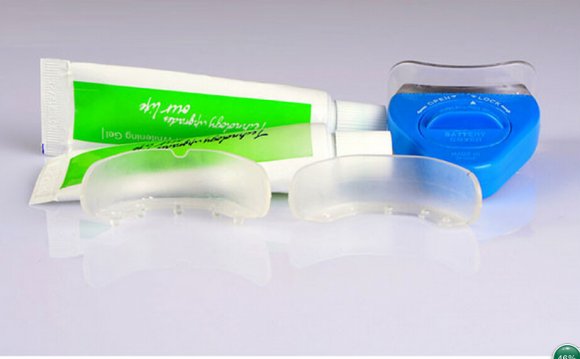 If you're concerned about what's in dental whitening gel and how it works, there is good news. Most gels contain hydrogen peroxide and a few other added ingredients to improve the product's performance and flavor. Whitening gels gently bleach teeth and don't damage them. For young and old adults, dental whitening is a safe and effective way to treat stained or discolored teeth.

Carbamide peroxide is a slow-acting bleach in whitening gels that dentists can supply for you to use at home. Dentists take an impression of your mouth in the first appointment, and at the second appointment you receive whitening trays and whitening gel to apply in the trays regularly at home. At-home treatments usually contain 10 percent carbamide peroxide, which breaks down into 3.5 percent hydrogen peroxide.

Many people experience sensitive teeth after using a dental whitening treatment, but added ingredients reduce this effect and provide other benefits. Teeth sensitivity doesn't last forever, but it affects 18 to 78 percent of dental patients, according to Dr. Strassler. Two common whitening gel ingredients that reduce tooth sensitivity are potassium nitrate and amorphous calcium phosphate. Potassium nitrate is also an active ingredient in toothpastes for sensitive teeth, such as Colgate© Sensitive toothpaste.

Dental whitening gels lighten teeth and remove stains effectively, but they aren't for everyone. The American Academy of Pediatric Dentistry says parents should wait until all their child's front permanent teeth appear before having them whitened, because new adult teeth will be a different color than whitened teeth. Additionally, dentists like to see patients before they use a whitening gel. Teeth with very dark stains, crowns or many fillings might not give good results from over-the-counter dental whitening gel products. Your dentist can advise the best way forward.