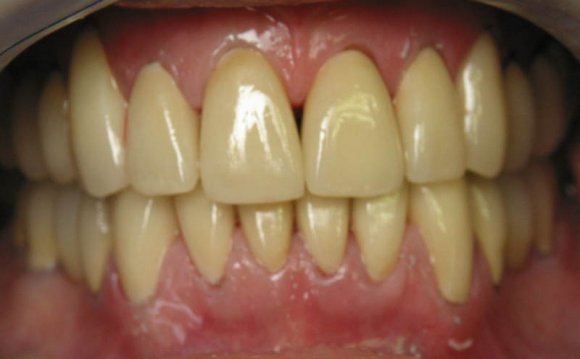 Yellow teeth are not a great look in an appearance obsessed society raised on the photoshopped images of blinding white smiles. But what causes yellow teeth and how can you prevent it from happening in the first place?

There are two related reasons why your teeth slowly turn from white to yellow. The first well known one is foods and drinks that stain them directly and the 8 worst offenders for doing this will be covered ahead.

The second less commonly known reason is acids in certain foods and particularly drinks that wear away your teeth’s white enamel coating. Soda for instance is highly acidic and regularly leaving it sitting on your teeth can start to wear down their protective outer layer.

When it’s at its thickest, tooth enamel is naturally white. Unfortunately as it is worn down it becomes translucent and starts to show through to the next layer of the tooth underneath called dentin.

This dentin layer of your teeth has a naturally yellower tone to it than that of the enamel that covers it, so the thinner your enamel layer becomes the more yellow your teeth will appear. This is why many elderly people have relatively yellow teeth. The longer you’ve had your teeth, the more chance you have to wear down their white protective coatings.

8 Foods and Drinks That Cause Yellow Teeth

Ahead are a list of foods and drinks that are some of the worst culprits for making your teeth go yellow. The reason that most of them have made this list is that they not only stain, but they are also acidic and can wear away enamel, so providing a double whammy of teeth yellowing.

While some of the drinks and foods that cause your teeth to turn yellow are unhealthy anyway and worth avoiding, one or two of these are otherwise good for you and following this list is a couple of surprisingly simple things you can do to minimize the damage these foods and drinks do to your teeth without giving them up.

Black tea is full of tannins that promote teeth staining and it is considered one of the most problematic drinks for teeth discoloration.

It’s particularly bad if you have it with other staining foods and drinks (anything you’d have trouble washing out of a white shirt counts) as these tannins tend to increased the way other heavily colored compounds adhere to the dental enamel surface.

is considered much less likely to cause problems and healthier as well, so making the switch to it could be a good thing to do for your future smile.

The phosphoric and citric acids in colas and many other sodas, along with their massive amounts of acidic sugar, all wear down tooth enamel.

​he old tale about a tooth left in, but the experiments I’ve seen did leave teeth heavily discolored after one night and black after a week. Cola is clearly not something you want sticking to your teeth too long.

While cola, with its is worse, even lightly colored sodas are acidic enough to damage the enamel of your teeth. Recent studies have also shown that many so-called ‘sports drinks’ have even higher levels of destructive acids than Pepsi or Coke.