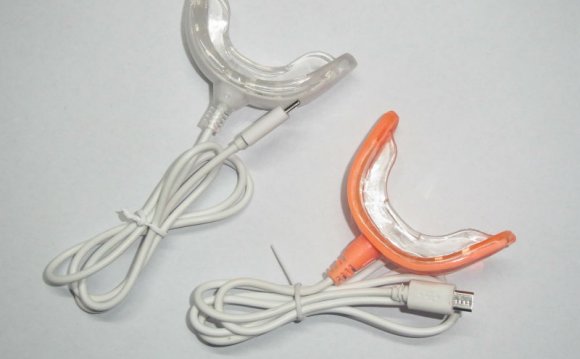 It has often been asked as to whether or not the use of our bright blue accelerator light was necessary. More simply put, "Do teeth whitening lights work?". This paper reviews the efficacy of the use of a strong blue light source in addition to the usual procedure of vital teeth bleaching or teeth whitening with a peroxide-based gel placed in direct contact with the dental hard tissues. This is the type of system that SmileLABS™ uses. A research of the current literature and scientific papers will show whether or not the additional use of a strong source of blue light causes the treated teeth to become whiter than those bleached without a light. It will also examine any possible further benefits obtained by using the light in addition to whitening the teeth.

Currently, cosmetic teeth whitening or teeth bleaching is performed, either in a dental office or by an independent entrepreneur, by placing a peroxide-based bleaching gel into direct contact with the dental hard tissues. This contact of bleach to teeth is facilitated either by painting the gel directly onto the teeth or by use of a custom made whitening tray loaded with bleaching gel that is placed into the mouth to carry the gel and keep it held in constant contact with the outer surface of the teeth. It has been shown that these two methods will result in noticeable whitening of the teeth, with the finished degree of whitening being based on both the relative strength and concentration of the peroxide-based gel and the amount of time that the active gel is left in contact with the surface of the teeth. If the concentration was low, a longer amount of time of contact with the bleach was needed to achieve a satisfactory result. This meant that for the patient a number of daily treatments were needed either in the dental office or at the patient’s home for the teeth to become satisfactorily white.

Making the bleach concentration stronger, on the other hand, would speed the color change, but would often lead to increasingly painful tooth sensitivity, which was a very non-desirable result for both the patient and practitioner. So, experience showed that a good result could be obtained at home if the patient used either a medium peroxide concentration of bleaching gel coupled with a regimen of spacing the treatments into an hour per day for a number days to a week, or to all-night bleaching with a low peroxide concentration gel every night for a 7-21 day course of treatment. These two variations of the teeth bleaching processes have been used for many years with a good and predictable outcome for the patient who actually correctly completes the treatment regimen.

The only downside was that results were not immediately obtained, but were gained incrementally over a number of days or weeks. Since this type of treatment was done unsupervised at home, strict compliance with treatment guidelines was many times hard, if not impossible to maintain, and results and patient satisfaction with the treatment were many times negative.

Therefore, many a practitioner hoped for a way that could combine the shortest course of treatment, coupled with the ability to be able to supervise the entire treatment to a satisfactory conclusion, that was both easy and pain free from sensitivity to the patient.

This hope resulted in what is now known as Chairside Power Bleaching, the system used by SmileLABS™. By combining a higher concentration of peroxide gel with the use of a strong, safe wavelength of light as an accelerator or catalyst to the teeth bleaching reaction, a much shorter time of contact between gel and tooth resulted that increased the bleaching efficiency of the gel and shortened treatment time by a very large factor, while keeping the process mostly free from sensitivity and achieved the patient’s desire of whiter teeth in minutes instead of days. The question is now whether that combination of gel and light really works.

In an in vitro study conducted on non-vital extracted teeth, K. Luk, L. Tam, et al showed that color changes were “significantly affected by an interaction of the bleach and light” used. In their article published by the Journal of the American Dental Association they found that the application of light greatly “improved the whitening efficacy of some bleach materials…” This study also pointed out that the wavelength of light used had a direct bearing on the increase in temperature inside the tooth, which, if it was too high, could result in increased risk for internal tooth nerve (pulp) damage which might result in pulpal inflammation or death, thus necessitating possible future root canal treatment therapy. The wavelength of light associated with the least rise in internal temperature and that speeded up the chemical bleaching reaction was at around 480 to 520 nanometers, or the color of visible light spectrum blue/green.[i]

In a more recent in vivo study published 2009 in the Journal of Dentistry, JC Ontiveros, et al., found that when using a supplementary light there were “significantly greater bleaching-dependent changes (i.e. the teeth got whiter) in color compared to treatment without light when assessed using instrumental (intraoral spectrophotometer) measurement methods. The same was determined for the visual method with Vita Bleachguide 3-D Master shade guide.[ii]

Back in 2002, when Chairside Power Bleaching first started, a comparison trial of the whitening effects of the first light-enhanced Zoom! ™ Chairside system was studied against Opalescence™ Xtra Boost, which did not use an accelerator light. The Zoom! gel was 25% peroxide and the Opalescence used 38% peroxide. At the end of the trial, both systems were shown to improve teeth shades by between 6 to 9 shades whiter. However, the light-enhanced system, even with its lower peroxide concentration, was shown to be 11 to 22 percent whiter than the higher concentrated non-light-activated gel.[iii]

In a study of wavelength specific lasers used in dentistry, DN Dederich, et al., reported in the 2004 JADA, the best wavelength of light used to facilitate power bleaching was in the 457 to 502 nanometer visible blue light spectrum because of its significant aid in bleaching the teeth while it did not produce the internal tooth heating that other wavelengths of light might cause. They definitely also were against the use of infrared wavelengths that tend to heat the tooth, such as those employed by a CO2 laser.[iv]

In the cover story to the February 2003 JADA, J Goodson, M Travares, et al showed that by using a light and a “relatively low–concentration peroxide (15 percent) for a treatment period of one hour, we were able to achieve a high level of tooth whitening that persisted for a minimum of six months with minor transient tooth sensitivity.” The light that was used was a short-arc gas plasma lamp emitting in the blue-green visible light spectrum at 400-505 nanometers.[v]