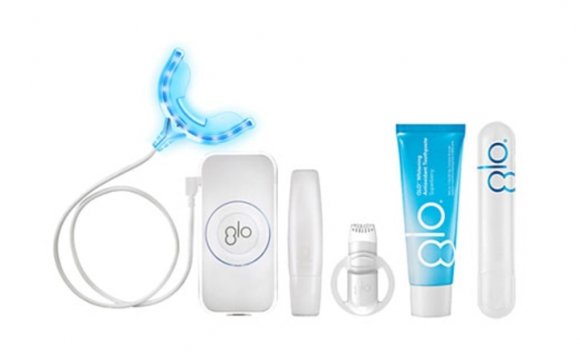 A former Crest Whitestrips devotee, I haven’t used any teeth whitening products for about six years. Hundreds of cups of coffee later, I’d been meaning to try something new to brighten my chompers, but never found one interesting (and affordable) enough to look into, until I heard about the GLO Brilliant Personal Teeth Whitening Device. Created by Dr. Jonathan Levine, a renowned dentist and program director at NYU College of Dentistry, the device is supposed to give you a brighter smile in just five days, easily, and at home.

Admittedly, I was nervous to try any sort of new whitening system—remembering how sensitive Crest Whitestrips made my teeth back in the day left me wary of repeating the same kind of experience. But GLO claimed there would be no sensitivity, which was a promising relief.

The product packaging is very well-designed—sleek, with an all-white exterior—giving it the same sort of vibe as a brand-new Macbook or iPhone. The device itself, which is small, white, and rectangular-shaped with a single, simple “power” button actually looks like it could be iPhone’s little sister.

The directions seemed rather simple: charge the device, put on the provided lip balm to protect lips, apply whitening gel to your front upper and lower teeth with its plastic brush, insert the mouthpiece, and press the power button—and the device will then automatically shut off after eight minutes. You repeat the process four times in succession, equalling a total of 32 minutes, and depending on your starting shade and how white you want to go, you repeat the treatment every day, and up to ten consecutive days max. Sounded easy enough!

After four hours of charging, my GLO was ready to go. I put on the balm, which was minty moisturizing, and then squeezed the whitening gel into the brush, coated my front teeth with it, and put the mouthpiece in. I pressed “power” on the device, which was hanging from around my neck; both it and the mouthpiece illuminated a nice, calming blue. (All I needed were the right tunes to turn the process into my own personal smile-brightening dance party.)

After a minute or so, I could feel the device getting warmer and my mouth producing saliva. I was scared. I felt trapped. So I decided Snapchat was the best way to relax and sent a picture of my glow-mouth self to a few lucky friends. I spent the rest of my first eight minutes seductively (read: awkwardly) winking at my boyfriend with the glowing device in my mouth. I also looked at myself in the mirror and was reminded of my four long years of braces and retainers, and how my best friend (who went to the same dentist) was forced to wear orthodontic headgear that attached to her forehead, making her look like a junior varsity quarterback. Compared to that, the GLO mouthpiece wasn’t too bad. Shortly after, my first eight minutes were up and I took out the mouthpiece, spit into the bathroom sink, and rinsed it with warm water as directed. On to round two!

By the third application, I was dreaming of drinking a cold fruit juice. For some reason I felt thirsty. Was it because of the GLO device or the fact that I ate chips and salsa shortly beforehand? Who knows, but visions of agua frescas danced in my head. I distracted myself by putting on the latest episode of Girls. After my fourth and final application of the day, I inspected my teeth. They seemed…whiter. Was it my imagination? I asked my boyfriend if he noticed any difference and he said, “They look weird.” I took that as a positive sign!

After my third day of doing the treatment, I was ecstatic to see that my teeth had gotten whiter. This was co-signed by a couple of friends who noticed my brighter teeth without me ever saying a word.