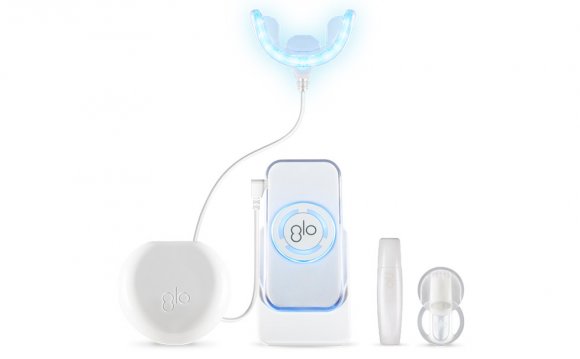 We're always eager to get behind a solid product, and all the more so when we find one that helps make the world just a little better in the process. That may seem an over-the-top way to lead up to a high-tech teeth whitening device, Glo Science's Glo Brilliant, but allow us a little back story:

When Glo Science founders, Dr. Jonathan Levine and his wife Stacey Levine, traveled to Rwanda in 2009, they didn't know they would come back to the United States with a personal mission. It was during that trip that Dr. Levine, an associate professor at the NYU School of Dentistry, and Stacey, met a woman named Agathe. "Our first meeting with Agathe was eye-opening, " Jonathan says. "Her teeth had been removed with a machete during the violent [1994] civil war and she hadn't felt comfortable smiling ever since, " he recalls. "She was covering her mouth with her hands."

Realizing they were uniquely capable of aiding Agathe's tragic situation, Dr. Levine took a mold of her mouth, went back to the U.S., and returned to Rwanda, bearing a brand new set of teeth. "She has not stopped smiling since she got her teeth, " Stacey says. "She is totally optimistic, confident, and happy – and now works as an oral health advocate in her village."

Since then, the Levines have made outreach to underserved communities a pillar of their work. After founding Glo Science in 2011, they established a charitable arm called the Glo Good Foundation that focuses on issues of oral health. "In some very impoverished homes, simple tools like toothbrushes and toothpaste are not found and visits to the dentist are not often part of the family's health routine, and are often the first thing to be cut when tough times are faced, " Stacey says. That may sound like a minor inconvenience, but the Levines caution that oral hygiene is actually a major health concern. "There is a large body of evidence linking oral health disease to systemic diseases such as heart disease, diabetes, and pre-term births. It's not always about beauty, " she says.

As part of Glo Good's mission, the company donates an oral health kit filled with a toothbrush, toothpaste, dental floss, and educational material to someone in need after every purchase of one of its teeth-whitening systems. The work is done through a few of Dr. Levine's associations: He sits on the board of Foundation Rwanda to help improve the life of children of the 1994 Rwanda genocide, and works with Operation Smile to help correct childhood facial deformities across the globe.

And as for the Glo Brilliant itself, it's a boon to the the 83 percent of American men who put teeth whitening at the top of their cosmetic procedure bucket list, according to a recent AskMen.com survey. The Glo Brilliant is basically a powerful but junior version of the LED and mouthpiece system that you pay hundreds of dollars for in a professional office. Combined with its hydrogen peroxide-filled gel vials (the first to successfully forgo strips) that get brushed onto the teeth, it whitens teeth up to five times after just five days of 30-minute sessions; this is the full procedure, which you only need to repeat every six months. We certainly noticed a clear change in the complexion of our pearly whites that didn't look fake.