Does hydrogen peroxide Whitening your teeth 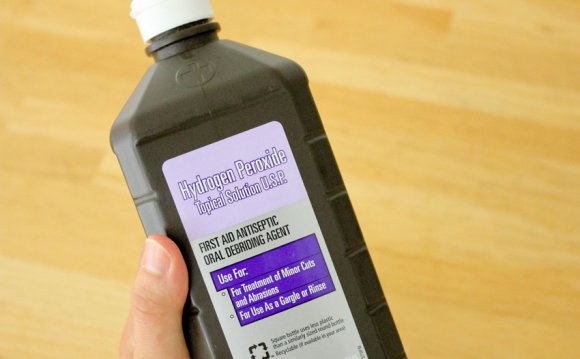 Many adults have childhood memories of getting scraped or cut while playing and having a sit down with the brown plastic bottle of hydrogen peroxide. A cotton ball, a swipe at the skin and then magic: bubbling, fizzy and crackly sounding chemical reaction as the hydrogen peroxide cleaned out the wound. With that dark brown bottle hiding the actual liquid inside, and its association with the family medicine cabinet, why would anyone consider putting it in his mouth?

Hydrogen peroxide, or H2O2, is a chemical compound that breaks down, or oxidizes, into water and oxygen upon contact with many other natural chemicals. It doesn't actually fizz by itself or when it touches unbroken skin; it's the enzymes in damaged cells and/or blood that causes the foaming action, but the release of oxygen from hydrogen peroxide is what makes H2O2 a very effective cleaner. In addition to cleaning out cuts, it's used as an additive in laundry detergents and for getting stains out of upholstery and carpets, for general household cleaning and for lightening hair. But is it safe for your teeth? Yes and no.

Dental office and store-stocked teeth whiteners contain a compound called carbamide peroxide, which breaks down into hydrogen peroxide and urea - the hydrogen peroxide becomes a bleaching agent while the urea serves as an acid to break apart stain bonds in the teeth [source: ADA]. Hydrogen peroxide becomes a powerful and effective whitener as it's released through contact with the air, moisture and teeth. Most over-the-counter (OTC) teeth whitening products contain about 10 percent carbamide peroxide while solutions administered or sold through dental professionals can contain from 15 to 35 percent (though the American Dental Association gives its Seal of Approval to the 10 percent H2O2 whiteners only and not those with higher concentrations) [source: ADA].