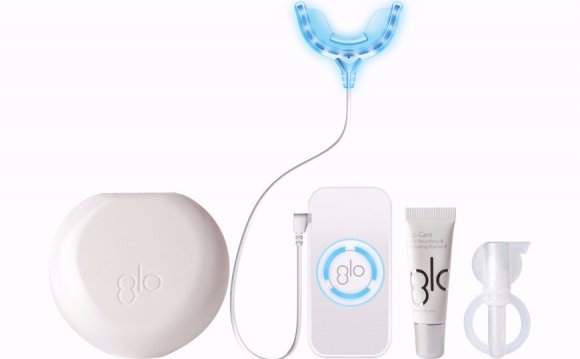 The Glo Brilliant Smile Whitening System was among the most effective at whitening teeth in GHRI tests. On average, teeth were a full shade whiter after use and some consumer testers were up to four shades lighter. Unfortunately, the Glo System's tricky use kept it from being a real standout. This product uses an LED light and heat in a closed mouthpiece to activate and accelerate the peroxide gel on the teeth. Though overall whitening time is just over a half hour, instructions ask users to use one G-Vial daily four times in eight-minute increments, a process multiple testers found "time consuming" and "irritating." The device's light is powered by a compact, iPod-like controller that has to be charged for several hours before use, and some consumers complained about the charging time, when they forgot to leave it on the base before use. Although one tester said her "husband and daughters said it looked silly, " during each 8-minute session the device is hands free — a definite plus compared to other devices that need to be held in place the entire time. It also comes with extra gel, so you'll be able to use the system several times. And users with sensitive teeth will appreciate that most consumer testers didn't complain that this formula irritated their teeth.