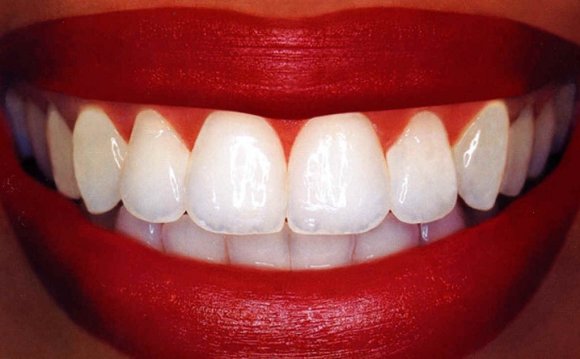 It’s safe. A study by Chase and Cohen published in the Journal of Endodontics evaluated bleached teeth that were then extracted(don’t worry, these teeth were being pulled for braces anyway.) They looked at the teeth at differing stages: after an hour of whitening, three days later, 15 days, and 30 days and determined histologically(microscopically at the cellular level) that bleaching was harmless to the pulp. There are some opposing studies done on animal models(dog and mice teeth instead of human teeth) that show that pulpal cells(odontoblasts) are temporarily effected and return to normal in 60 days but nothing has been shown like this in human teeth.

What does bleaching do to the enamel? At the concentrations we use in dentistry (5%-38%), it doesn’t damage the enamel. There is no softening, stripping, or abnormal wear of the enamel associated with whitening. Haywood et al in the Quintessential International evaluated the effects on enamel with a 10% peroxide bleaching solution with different length applications. In all cases the enamel polish, and surface were unaffected. Polydorou et al evaluated microhardness of enamel after treating with 38% hydrogen peroxide(hp), 30%hp and Zoom2 25%hp and found no difference in microhardness(2008.) There has been a study showing that existing grooves become deeper with more bleaching, but this may be associated with dehydration, my next point: why am I sensitive?

I would say about 45% of my patients have mild sensitivity towards the end of their whitening cycle, especially younger patients. 50% of my patients have no sensitivity, and the last 5% have more severe sensitivity. There’s a lot of research and theories as to why, but it’s my opinion that it lies with tooth dehydration. A large concentration of peroxides naturally dehydrate the teeth during bleaching and using a UV or LED light makes it much worse, causing even more sensitivity!

This is why I personally don’t like Zoom whitening, not to mention the fact that it uses UV radiation. It can be safe if done correctly by properly trained personnel, but improper use can accelerate your chances for cataracts, sunburn, sensitivity, or even skin cancer. So please don’t get your Zoom whitening done at the mall, if you insist on that system. Simply put, the marketing that has been done has everyone believing Zoom or any light/heat based system is a better whitening system. While it is controversial, in my opinion, that’s simply not true, and there’s plenty of research to support it. Polydorou et al evaluated bleaching of In office bleaching systems vs Zoom and found there was no difference after teeth rehydrated. The researchers Leonard et al came to the same conclusions. Teeth will appear whiter when dehydrated(and more sensitive), so whitening systems that use UV light, heat, lasers, LED lights give a false initial whitening that takes ~5-7 days for the tooth to rehydrate and end up less white. This process is called rebound and naturally happens, but even more-so in light-based systems.