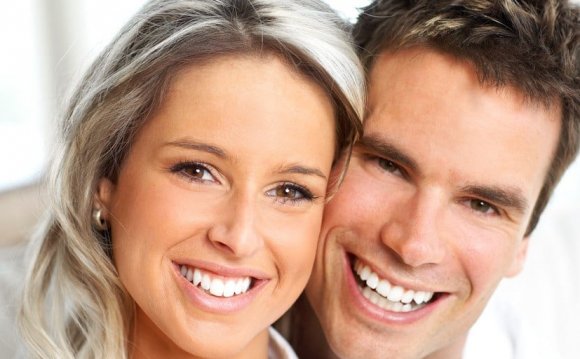 I’ve always been game for trying out the latest and greatest beauty procedures—as long as they didn’t involve a scalpel or needle. From freezing my face (yes, that really happened) to peeling off my skin for a more “youthful” glow, anything was fair game if it promised I’d get a tad closer to looking like J. Lo.

So when I got engaged, I knew it was the right time to try a new treatment, but I'd need to dial down my daringness. I want my fiancé to still recognize me when I meet him at the altar! That’s when the concept of professional teeth whitening crossed my mind.

I’d never whitened my teeth—ever—aside from using whitening toothpaste (which definitely did nothing). I had friends that were die-hard Crest Whitestrips users and swore the results were worth the hour-a-day upkeep. I, on the other hand, begged to differ. The thought of having to spend an hour a day with a Band-Aid-looking device strapped to my pearly whites was enough to deter me.

Then my Instagram feed started blowing up with C-list celebrities cheesing with these handheld, LED-lit teeth whiteners—clearly well-paid endorsements. I have to admit; I bought into the hype and checked out the websites selling these “magical” devices only to find that they were ridiculously cheap—some just $20! To avoid risking a toothless smile from a DIY attempt, I decided to turn to an actual cosmetic dentist.

A professional teeth whitening doesn't require any prep, but it's an hour-long treatment.

I called Lana Rozenberg, D.D.S.’s office to schedule my early-morning Zoom! Teeth Whitening Treatment and asked if there was anything I should do to prepare. Nothing. So, I brushed my teeth, flashed that yellow smile in the mirror once more, and headed to her NYC office. When I arrived, I filled out all the basic, first-time patient paperwork, skipping pages of paragraphs that probably detailed how I was signing my life away.

Related: Here’s Exactly What I Do To Get Super-White Teeth Without A Bleaching Treatment

Then, I was led to a room that looked just like any other dentist office, which (not gonna lie) stirred up some nerves. It definitely felt different from all the other beauty treatments I'd tested. Dr. Rozenberg explained that I was going to get the brand-new Zoom 4 treatment—apparently the fourth edition promises a less painful, only minutely sensitive procedure. Great!, I thought—until she informed me that Zoom 4 was not the quick solution I expected. Instead, three whole sessions of 15 minutes are required. 45 minutes of sitting still? For someone who has the attention span of a fruit fly, this wasn’t an easy task. The Zoom 4 treatment will run you about $675 at your dentist's office. (Full disclosure: This treatment was provided complimentary.)

Here's a picture of me before the treatment.

I’d read a little online about how you’re not supposed to eat certain things after getting your teeth whitened, so I inquired about what exactly that entailed. “Stay away from soy sauces, marinara sauces, tomatoes, berries, or anything that could stain a white T-shirt, ” says Dr. Rozenberg. “What about hot sauce?” I asked. “Nope!” Dying. “Oh, and no red wine for 48 hours.” WHAT?! That almost put me over the edge, but I resisted my body’s involuntary urge to peel myself off the chair. I guess my week-old red wine bottle at home would have to be thrown out.

After that bit of bad news, the dental hygienist began the whitening process. She started by "pumicing" my teeth to buff away any surface stains. This felt just like any teeth cleaning I’d ever had, except way less water and drool involved. Next was the sealant, which protects the gum tissue from the whitening gel. To get the sealant in the right place, the hygienist tried inserting a giant, mouthguard-looking device with no success. The thing looked like it was meant for pro football players. In the end, she had to fetch a smaller guard that did the trick.

Related: This Woman Had An Intense Allergic Reaction To A Teeth-Whitening Treatment—What You Need To Know

The sealant took only a few minutes, and then I was ready to tackle the whitening gel, which is made of 25 percent hydrogen peroxide. This was probably the easiest part. Once the gel was set, I sent one awkward Snapchat to my bestie for good measure, and then the hygienist shut the lights off and directed the UV light towards my choppers. "The UV light actually activates the hydrogen peroxide so it can oxidize and penetrate the enamel and lift the stain resulting in a whitening effect, " says Rozenberg.